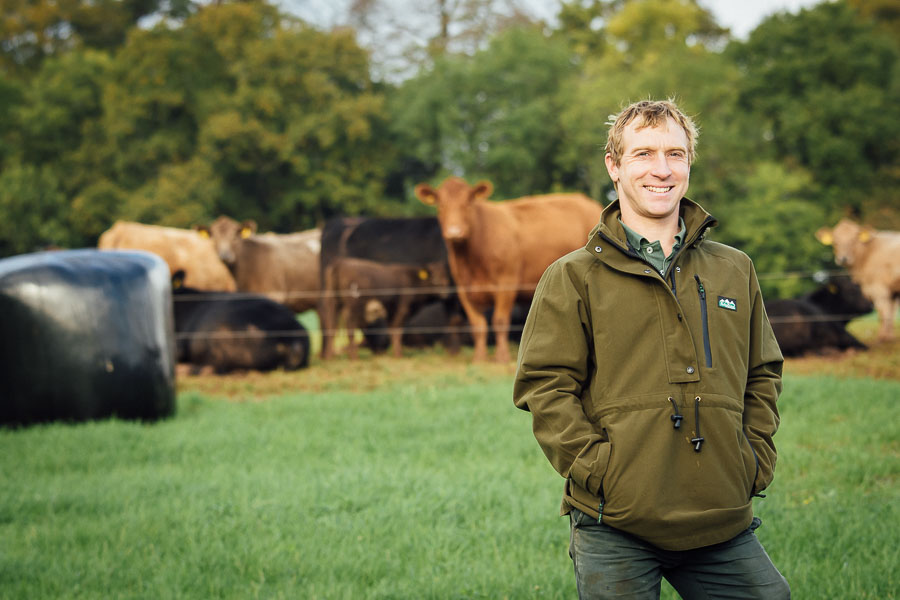 The Power of Why.

Joining the farming partnership on this 3rd generation Devonshire farm, was a great opportunity for Chris, but did start the question of Why are we doing it like this? Legally bound to sign off the accounts he started to question the finances and realised that without the BPS they were not looking good. Why?

Further talks with his YFC and college peers, the question of why are we working long hard hours, when others are working less for a better income, really started to be questioned.

Not one to sit still, Chris won a farming scholarship to New Zealand and this was the ‘lightbulb’ moment he needed, seeing forage based systems with 1 man running 4000 sheep whilst him and his father worked hard with 600 really hit home, there was a better, simpler way of doing things.  On coming home Chris was keen to make changes, starting with the sheep genetics.

He bought in a couple New Zealand Highlander rams; forage based, hardy out-door lambing genetics, he was crossed onto 160 Mule ewes.  With something to prove and a positive mindset, Chris saw a successful first lambing, which was the catalyst of change.

Next were the cattle, a move to an Angus x South Devon meant a hardy, polled, lighter, easier calving cow, which could finish well, without the high inputs of creep feed.  A welcomed move away from the heavy continental finished at 24-30 months who spent most of their life growing a frame to eventually put the 400kg desired weight on to.

We didn’t jump in all at once, it was a gradual change, as we had more questions, but we found answers from people doing the job well.

Conversations, questioning, delving into the finances, all expand the mind, and see changes of opinions and ideas. It leads to questioning ‘is this the right way’? Is this the only way? These conversations and small moments in time led to gradual changes for Chris, for which he is grateful, making it fun to look at the farm again through different eyes and see what else can be done.

Signing up to the AHDB Benchmarking (https://farmbench.ahdb.org.uk) highlighted that later lambing looked better on paper, with the Highlander X sheep already in the system this was the evidence he needed to start finishing the lambs off grass and reduce reliance creep feed.  The autumn suckler herd and arable were both working at a loss, the time had come to unleash the forage-based system Chris had been working towards!

Benchmarking is a really important tool for understanding your business, and the farming community is not good at doing this. Any decent business will have its focus on costs, as most of them haven’t got a subsidy to fall back on.

Chris started rotational grazing on his own, seeking answers from others already on the journey. Visits to other farmers, talking it through and seeing it with his own eyes saw him make a start. Having the gear and some idea but no plan for infrastructure Chris knew he needed help. Newly married with a baby on the way, Chris needed to up his rotational grazing game, so he could be focused and have more family time.

Bringing James from Precision Grazing into the farm business was a game changer, focusing the mind, setting Chris in the right direction and keeping him on track! James brought with a different perspective of the farm, answers to a growing list of questions and accountability.

Measuring to manage the grass, benchmarking and creating a sustainable system that worked for the whole farm to ensure they could keep grass in-front of stock during the dry Devon summers, were the key aims for Precision Grazing and Chris to achieve.

Getting out on farm plate metering saw the utilisation of the FARMAX program but importantly saw Chris re-connecting with the farm, as he walked and measured the farm with his newborn son strapped to his chest.

Walking with him on my chest gave me a different feel for how life might be, especially for him and the farm – I just knew it was the right direction to be going in.

Next came herbal leys, to Chris they had been ‘a bunch of weeds’ until he discovered their value. The risks of the farm were the dry summers on free draining sandy soils, trying (with limited success) to finish lambs on summer brassicas and keep forage in front of the stock. James suggested herbal leys. Loving a trial Chris took out 8ha from the arable land and planted a mix of chicory, plantain, red and white clover, put the weaned lambs in at 26kg and weighing them off field a month later at 36kg – this was the ‘magic bullet’ the farm needed.

Requiring no fertiliser and being drought resilient, Chris was convinced to establish more and took the opportunity to do so under the Countryside Stewardship Mid-tier Scheme sowing a mix compliant mix of 5 grasses, 5 herbs, 5 legumes including 10% red clover.  Herbal leys now account for 20% of the farm area, a target set by James as the minimum area needed to provide sufficient – summer safe grazing for finish lambs.  This, combined with grazing management, has been a big game changer to the farm business.

The whole system is now geared towards soil biology which Chris knows is their biggest on farm asset. Farming with high fertiliser and chemical inputs will only make the soil more acidic which has a negative impact on soil health.  No inputs, a grazing plan and growing herbal leys have seen a positive change to the soil health and organic matter levels.

These changes have also had a wider environmental impact, being part of a Carbon footprint case study, Chris was able to show that he has reduced his emission by 156ton of carbon a year.  The reduction in inputs is also saving the business £47,000 a year whist production has increased – see below!

This summer was a dry one, the last decent rain fell the day before lambing started, which was great for the lambing season, but as the dry weather continued, the grass growth slowed, and decisions had to be made. Lambs were weaned earlier, and priority grazed on the herbal leys, so they could be finished quickly. Cattle were shut up on silage.

Having a plan in place gave Chris the confidence to make these changes, knowing what covers he had going forward, ensured there was light at the end of the tunnel for this seasons grazing but also knowing he was making decisions to protect ewe condition to ensure a good scanning, preventing one tough year becoming two tough years.

The rain came at the end of September, and the rested fields and herbal leys were extremely quick to recover meaning the farm is now in a great positon heading into winter – a testament to what planned paddock grazing can achieve.

Chris feels 100% that he is in a positive place moving forward as the BPS declines and input costs increase, as he is able to farm without them, he has taken back the control and has enthusiasm and excitement for farming.

Knowing the finances are there to do something you love with a system you’ve  been creating for 10 years really has given me back the excitement of farming.

Having Precision Grazing push him in the right direction has sped up the farms progression by 10 years. Having someone who has experience, a positive mindset and who Chris is accountable to was the right decision for him to take.

Going forward Chris is confident in his system, but is happy to not sit still as he is excited where the farm has come from and where it can go! Improving the infrastructure with some permanent electric fencing to split the largest fields in half will simplify the system and reduce labour further.

Advice for those thinking of changing their grazing system –

Be curious, don’t be afraid to try things, don’t expect them to fail – give it your all!

The future is certainly looking good for Higher Thornton farm, by moving to a system that feeds the soil biology, grows drought resistant plants and cuts out external inputs has given Chris the gift of control.

I have a low risk farm, good financial security and time to spend with my young family– it is all looking rosey!

Words and Images by Sian Mercer, My Rural Tribe

To listen to our full conversation please follow the link below