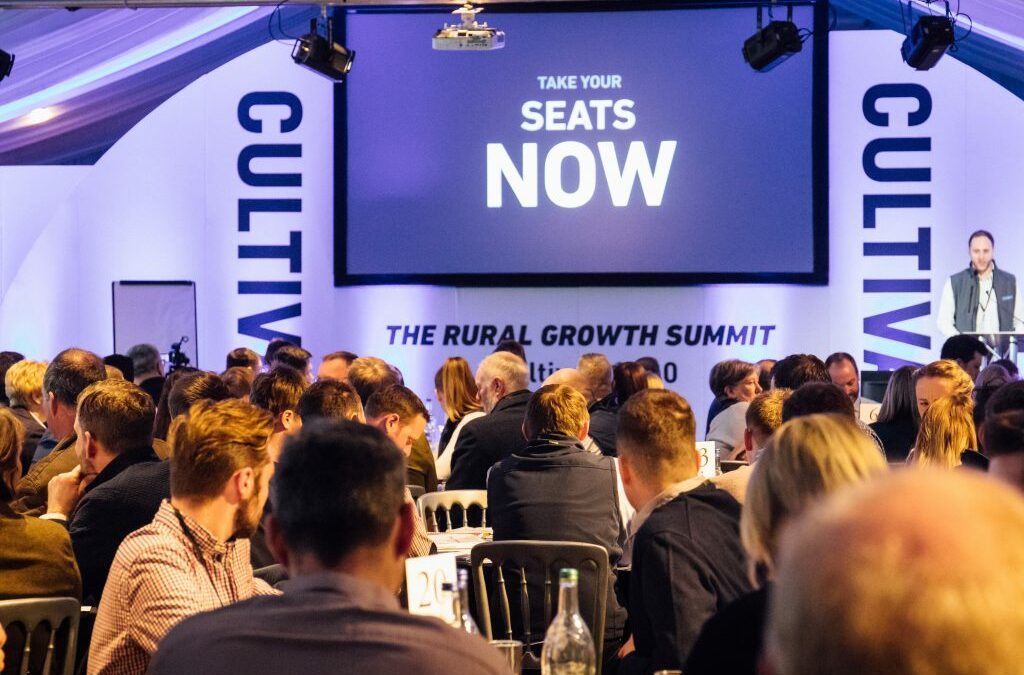 Culitvate is not your usual farming conference, no industry specific talks, no science and very limited tweed! Cultivate was setting a new agenda, a new type of agricultural conference, bringing the city to the countryside, and with it – SO MUCH FRICKING INSPIRATION!

The venue looked amazing, were we in Manchester or rural Macclesfield? The stage set the tone for the event, this was a professional event, aimed at the farming community.

An early start for breakfast and networking…. Breakfast was cooked by Stable Yard Catering ,using local produce, the Staffordshire Oat cakes wrapped around cheese and bacon, were amazing!  This was networking at its best… but people stuck with those they knew….this wouldn’t last long.

Only 4 speakers… at a paid for conference, with no industry specific talks, from 8am – 5pm…… huh?!

Malcolm Smith was amazing, the FCUKS were flying around but boy the room was buzzing with energy, the audience were challenged, they were engaged, there was laughter, conversation, and just A LOT of WOW! I was totally blown away, how someone can be so engaging, so inspiring! Notes were being written, quotes photographed, learning was taking place…..

A break… from a quiet breakfast to an increase in volume, conversations were happening, people were talking, loudly, the laughter was carrying on…. The buzz….. to see and hear it… WOW

Brad Waldron – was exceptional.  From where I stand behind the lens, you see a different view… I must admit, I was worried, there wasn’t the laughter, where was the energy?…. But then BOOM! There is was… the room were listening, intently listening, engaged and focused.  The audience, were not allowed to relax in their chairs, they are up, doing tasks, engaging with each other, there was fear on some faces – no one wanted to the chairman, laughter was had – they all wanted the Ace, and wrist arm wrestling…. you can never get some sights out of your head! James Bond, the ultimate role model, gets in, gets the job done, gets home and still makes his lady feel special, all while being an Ace.

More energy, you could feel it, you could see it… people were sitting taller, engaging with others on the table… wow… just WOW.

Broaden yourself, travel and see what people want..

Ross McMahon…  bought a Heinz factory for a £1 and started producing – Kendalmil baby formula. Ross, originally from Ireland and having worked within the food processing industry for years, was epic…. Quietly spoken, not sticking to script, and so very interesting… when they say surround yourself by influential people, he did this from a young age, you surely cant’ go wrong having Barry McGuigan as our best friend!

Ross became a Twitter sensation in China for flaunting his tins of baby formula, a market who have a huge appetite for the stuff! Insightful, inspiring, thought provoking… there are markets out there for British meat and dairy, countries who hold our produce in high esteem, because they know it comes with such high standards, of welfare and production.

The time is now, to step away from the farm and to look in other directions to find a new way for your produce. Ross spoke of how travel is invaluable, to learn from others, to attend food trade fairs, to find out what the next ‘trends’ will be and to meet your consumer.

A family journey, full of passion and grace..

Jane Lane, of Tebay Services, surely the best services EVER?! Gave the most beautiful, graceful and passionate talk, about the ‘Why’ behind the services. Started by her father, they took advantage of the M6 going north, cutting through their land and bringing the tourist with them.

Community is at the heart of all they do, the community that work for them and the community of local producers that provide, from the bread, the sausage rolls and the beautiful gifts.  The farm is still very much part of the Tebay story with all their own beef and lamb being sold through the Tebay shops.  A story of thinking outside the box, looking towards opportunities, and how to influence and work with your community.

Lives will be changed..

This day will have changed the lives of the people in the room, they will have be inspired, they may have gone away with realisations, the light bulb moment, or they may have gone away just thinking what a great day they had… BUT in the coming days, and weeks, they will remember something that was said, their actions, language and energy  may change, and this will have affects not only on them, but all those around them.

Who thought talks of ‘chunking’, telling your neighbour how great you area, James Bond and a deck of cards could be so powerful?!  To be inspired by other farmers who have made a massive impact on their communities, a community they created or one they grew up in?

But what is it all about? Energy! Engagement! Purpose! Your Why! and Your Community…

For most of the year they will have cultivated their business, the land, the livestock, but for this one day, they cultivated themselves, their thoughts, their actions, the land has been prepared and from that great things will grow.